16 games from the rulebook

The number of games you can play using the Green Box is continuously growing, and it might be difficult to know where to start. This post includes all the games included in the official rulebook that comes with the Second to None Edition (2017) of the Green Box of Games.

DOWNLOAD: Complete rulebook in English, German or French with rules for the 16 games included in this page.

A family game is a game that can be played and enjoyed by a family with children, or any other group where players are of different ages and/or with different levels of gaming experience. To achieve this, the rules should not be too complex, so the game can start quickly, and there should be a certain amount of luck involved, so everyone has a chance of winning. Also, to qualify for a family game, the game should be “friendly”, meaning it has little direct conflict between players.

(2-8 players) Gold Mine is a game of push-your-luck, where you have to decide how far you can go in search of valuable gems. It is perhaps the quickest game to set up in the entire Green Box repertoire, just shuffle the deck and you’re ready to go.

(2-4 players) Jump gate relies on the very familiar experience of roll dice – move – see what happens. It is a race, not to the finish line, but to be the first to collect all your own pieces scattered around the track. Luck will be predominant in any dice game, but the players also have cards in hand that they can play to augment the results, so clever decisions must be made in order to succeed.

(2-4 players) Tunnel Run *is* a race to the finish line, but using cards to move instead of dice. Play a card to move forward to the first available matching symbol. It is unique in that it’s complexity can be increased to fit different age groups, by increasing the number of cards in hand and pieces on the board that each player has.

(2-5 players) In Flower Garden the cards in your hand can have two functions: Play them in the shop to buy new flowers, or play them in your garden to plant the flowers you have bought. Hand management and clever gardening is required to score the most points.

(2-8 players) Fawlty Towers is a dexterity game with tactical choices and risk management. Stack the cubes in order to gain cards that score points. To get the most valuable cards you will need to take the risk of stacking on the highest towers, but if you are afraid it might fall you might want to play safe and go for the lower stacks.

The very generic label “strategy game” is used to express that these games have more complexity and/or more conflict than the family games. Luck will play a lesser role, and players will need concentration and competitive instincts to win.

(2-4 players) Grenade Salad would be a family game except for the fact that it’s all about killing the soldiers of your opponents. You start by throwing a bunch of cubes onto the table, which serves as an open battlefield. Then you play cards to outsmart and eliminate the opposition. The symbols on the cards have very specific meanings in this game, as some are used to deploy reinforcements and some to carry out different types of attack, including close-combat, sniper shots and grenades. And please look out for mines! 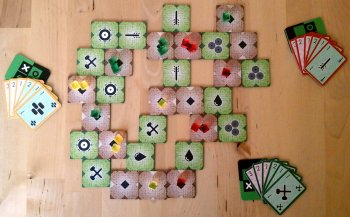 (2-4 players) War is more of a traditional war game, where you move your soldiers across the board to conquer territories. The basic War uses dice to resolve combat, hence involving a fair amount of luck, while War 2.0 equips each player with balanced sets of cards to be played in secret when fighting battles, relying on psychology and bluffing to create the necessary suspense. For both games you can create a unique board every time you play, making sure no two games are ever the same.

(2-4 players) The Gauntlet is another game in which you can create a unique new board every time, but it is a race to the finish line rather than a game of conquest. It is not devoid of conflict, however, as the cards you play can be used to advance through the track, to attack your opponents directly or to trigger traps that will damage them. And if you’re the clever but cautious type you might want to keep some healing cards handy just in case.

(2-6 players) All Your Base has no player conflict, as you are all preparing for the incoming invasion. Draft cards and pass them to the next player. Each card you play can perform one of three possible actions, acquire a base, build hardware or install software. Clever hand management and skillfull planning is needed to score the most points.

(2-4 players) Modelled after the mother of all tile laying games, the Son of Kark challenges you to find the best placement and the most valuable action when placing a tile and a cube each turn. Some options will score quick points, while some hold the promise of greater rewards toward the end of the game.

(1-6 players) Can you help the team of archaeologists to escape the temple before it crumbles, and are you able to save all the artefacts along the way? Temple of Doom is a solitaire or co-op challenge where you use one part of the deck of cards to move through the temple, one part of the deck to locate valuable artefacts, while the last part dictates which parts of the temple will be destroyed.

These are classic games with a history of a century, or a millenium, that can be adapted and played with the Green Box. 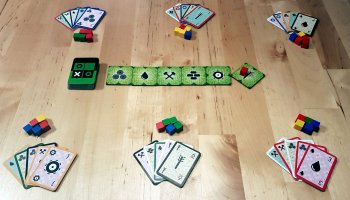 (2-10 players) Originally a dice game called “Liar’s dice”, this game requires clever bluffing and second-guessing if you want to avoid being called out as a liar.

(2 players) The game of Othello takes “a minute to learn, a lifetime to master”. The Green Box doesn’t have enough pieces for a full game, but a compact version can be played on a 6×6 grid.

(2 players) One of the truly great ancient games still widely played today. The game perfectly balances luck and skill, making it accessible and enjoyable to perhaps an even greater audience than chess.

(2-4 players) Perhaps most known in the form of “Chinese Checkers”, this intriguing game has no luck, but plenty of unpredictability when all players try to optimise their route towards their target.

(2 players) Perhaps stretching the “traditional” category a bit, but this fast-paced card game can be played with a standard deck of cards and several custom ones.

One thought on “16 games from the rulebook”