Fox and Geese is an abstract asymmetric strategy game for two players with ancient roots.

(The game was suggested by Chad Smith on the BGG forums) 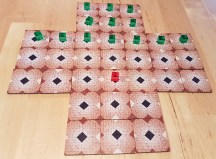 Build a cross shaped board with the tiles. Start with a 3×3 center and extend with four 3×2 arms.

Place the fox in the center of the board.

Both the fox and the geese can move one space in any direction, including diagonally. The fox can jump over geese to capture them, and multiple jumps are possible, like in checkers.

The geese win if they manage to trap the fox so he is unable to move. The fox wins when there are not enough geese left on the board to trap him (3)

More extensive rules can be downloaded from BoardGameGeek, and som history and variations can be found on Wikipedia.