We’ve put this game in the “Original” category, although it shares several rules with the basic War! that is placed under “Inspired“. Although the mechanics of this game are hardly revolutionary, the game is more inspired by a genre than by a single game. It is a game of conflict and conquest, of claiming territory on the map by attacking your opponents while trying to protect what you have gained. The game has no randomness, instead relying on psychology and bluffing to maintain the suspense necessary for a engaging game of combat.

20 cubes in one colour pr player

Sort the tiles to get 3 of each symbol face up, and the rest face down. Shuffle them around the table, and use them to build a more or less random world map. Make sure the green (symbol) tiles are evenly distributed throughout the world, and try to create several continents/regions that all have at least two entry points.

For a 2-player game, remove two symbols, and also 6 brown tiles. For 3 players, remove one symbol and 3 brown tiles.

Give each player a set of cards in their colour. The six cards valued 1-3 are the players starting hand, while the cards 4-6 are kept aside for later use.

Give each player their set of units (cubes).

Select starting player randomly. The player to the right of the starting player now starts selecting one brown tile as starting position, by placing one of her units on it. The other players continue in clockwise turn until everyone has placed one. Then the last player to place a unit chooses a second tile and places a unit on it. This continues until everyone first has chosen 4 starting tiles, and then for two more rounds where players place additional cubes into tiles they already own. When placing subsequent units, they can not be placed on tiles directly adjacent to a tile you have already chosen.

Now you are ready to start playing.

Each turn you perform three different actions in this order:

Play 1 card for movement. The value on the movement card determines from how many tiles you may move. Playing a 2 allows you to move one or more units from two different tiles. Each unit moves individually, and they can go in separate directions. You can move into another tile where you already have units, or into an unoccupied tile. Multiple movements are carried out in sequence, and in this way it is possible for the same units to move several spaces in the same turn.

Choose one tile which launches an attack into an adjacent tile containing enemy units. Play one card face down and wait for your opponent to do the same. Reveal the cards, then add the number of your units involved to the value of your card. If the card has the same symbol as the tile being attacked, add 1. Highest total wins, the defender wins a draw. The loser removes one unit. If you succeed in eliminating all defending units, you must move one unit into the conquered tile, but you may move as many as you like.

You may perform multiple attacks, as long as you still have cards in hand.

When you have played all cards from your hand, you take them all back, and add one card of a higher value. That is, the first time you add the 4, then the 5, and finally the 6 to your hand. You can reclaim your cards this way if necessary to perform the Reinforcements or Movement action, or to defend yourself, but not to perform the Attack action.

The game ends when all players have added the 6 to their hand. Now all players get one final turn before scoring, including the current player.

Each player first scores 1 point for each and every tile they own.

Then they score an extra 5 points for each set of three of the same symbol that they control.

The player with the highest score wins the game.

Here are example boards for 4 and 2 players, respectively. See the basic game of War! for more discussion on map layout. 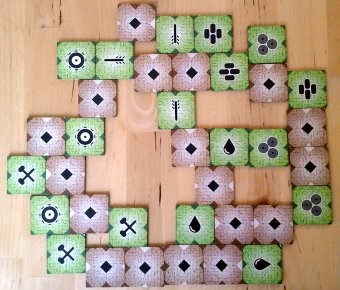 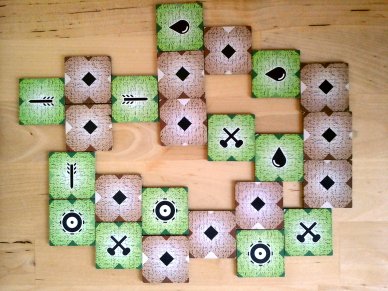